A college education in the US costs about $25,000 a year on average. Most students need to work pretty hard to support themselves over the four years it takes to get a degree, but here’s how one guy supported himself through his entire college education working only a few hours a week, by knowing how to influence how people make decisions.

How did he do it?

So he’d buy the car and, because he knew how to write a good ad, would get a few calls soon after from people wanting to come and have a look. He gave each caller an appointed time – the same time – to turn up the next day.

So the first prospect comes along and starts looking over the car, taking their time etc. as you might expect and asking whether the price was negotiable. But things changed dramatically when the second person turned up. The first guy suddenly senses a rivalry and says something like “Just a minute, I was here first.” If he doesn’t say that, our man points it out and politely asks the second guy if he wouldn’t mind standing over the other side of the road until number one’s finished. Now, of course, our first man is getting agitated and is sensing this has suddenly become a now-or-never, limited-time-only decision.

One of two things then usually happened – either the first guy agreed to pay the full asking price, or left abruptly. If he left, the second buyer would strike at the chance to buy the car for the asking price out of a sense of relief.

The power of scarcity – that the car was potentially unavailable – dramatically influenced the buyers to make a decision they might not normally.

This story is just one of many examples from a book I’ve just finished reading called “Influence – The Psychology of Persuasion” by Robert B. Cialdini, PhD.

Influences on your customers

In it, he explores six “weapons of influence” that we’re all prone to, and how they can be used by advertisers and marketers to persuade people to buy their products or services. 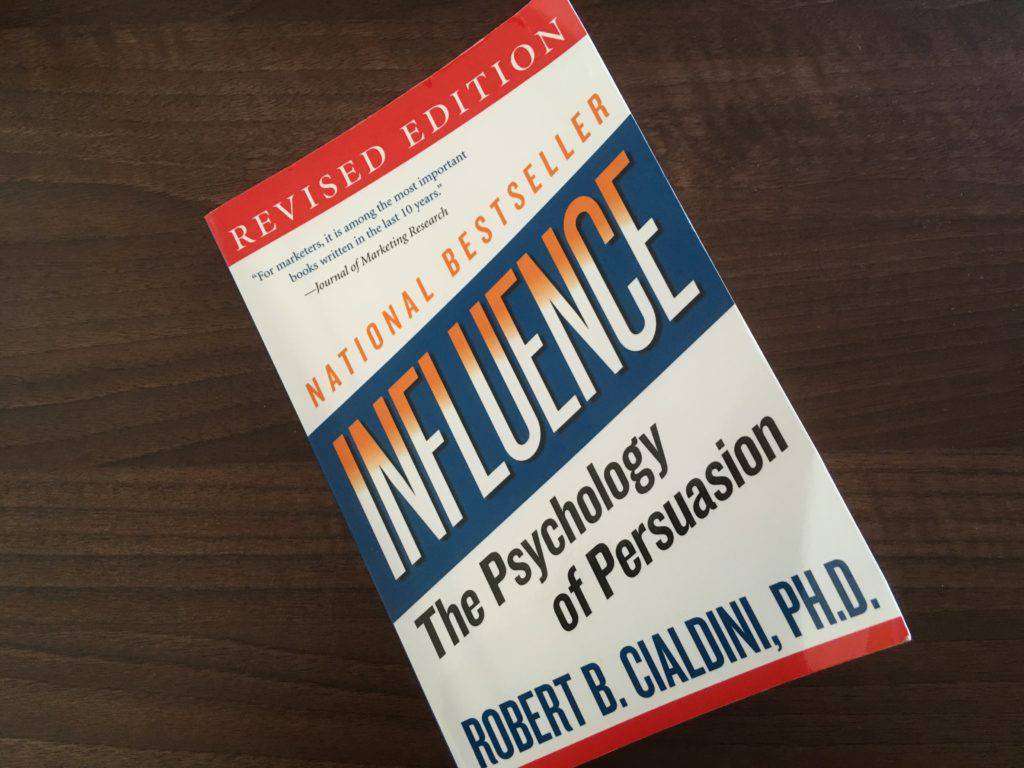 I thought this was a great book, and wanted to share some of the main points so you can consider using them (in an ethical way, of course!) in your own marketing strategy.

The first weapon is that if someone does us a favour, we try to repay them in some way, or feel more obliged to them. In experiments, researchers posing as fellow participants in a survey found people far more likely to buy raffle tickets from them when they’d bought them a can of Coke earlier in the day.

In marketing, the classic example of this is the free sample. In one clever and very productive twist on the idea, a shop owner in Indiana, USA sold nearly 500kg of cheese in a few hours just by inviting customers to cut off slivers for themselves as freebies.

A study done by two Canadian psychologists showed that people at the races felt more confident about their horse’s chances of winning just after placing a bet than immediately before. This is because once we’ve made a decision or choice about something, we feel pressure to behave consistently with that commitment. We even start finding reasons to back up why our decision was correct, even when evidence starts to build to the contrary.

Consider the practice of “lowballing” in the car industry, where an apparently good deal for a car is put in front of customers. This deal will never happen; it’s there to make the customer decide to buy. Once the decision’s made, the car salesman knows the customer is extremely likely to remain committed, even as extras get added, or an “error” comes to light that means a higher price ends up being paid.

Why do comedy shows have canned or “filmed-in-front-of-a-live-audience” laughter over them? Because TV execs know we laugh more (and enjoy the show more) when everyone else is laughing. Advertisers tell us something is “best-selling” or “fastest-growing” because they know we think if everyone else is buying it, it must be good.

With the proliferation of the web, social proof has gone up several notches with the use of online reviews. How many of us look for well-reviewed AND popular products when choosing? I know I often go for a product that’s not only got good reviews, but lots of them.

What’s interesting is that the strength of the social proof weapon is enhanced if the person we look to for that proof is like us. So a builder or tradesperson is more likely to buy something given good reviews by other builders, than by people in other professions.

However, we’re also more likely to be influenced by someone who pays us a compliment. Have you ever found someone more fanciable when you found out they fancied you?

An experiment done on men in North Carolina showed how helpless we can be in the face of praise. The men received comments about themselves from another person who needed a favour – some positive, some negative. The ones who got the positive comments nearly always carried out the favour.

A psychologist called Milgram carried out a frankly scary experiment where participants were instructed by a white-coated researcher to apply an electric shock to a fellow participant each time they got the answer to a question wrong. The voltage of the shock increased each time, right up to 300 volts, at which point the recipient was literally screaming and begging them to stop. What the participant didn’t know was that a) the shocks weren’t real and b) the other participant was just an actor. But they still did it anyway.

Because of the power of authority. We’re programmed from childhood to be heavily influenced by being asked to do something by someone in authority. In marketing, we see this weapon being used when products are endorsed by doctors, dentists and so on. And sometimes it’s pretty damn obvious they’re not genuine.

The last of the weapons of influence is scarcity. Experiments have shown we desire something more if its availability is deliberately limited. We even see this in small children – have you ever noticed how they suddenly want to play with a previously ignored toy when another child’s picked it up?

In marketing we see this all the time – on a bookings website you’ll see “only 5 rooms left” or in shops a sale “must end today”. When you add competitive rivalry to the scarcity weapon – for instance in an auction situation – and you’ve got something very potent indeed. The same combination is what leads to customers going mad on Black Friday, and what proved so successful for the guy at the start of this piece who was selling cars to get him through university.

“Influence – The Psychology of Persuasion” gives a great insight into why customers make decisions and how we can all be influenced. It’s quite old – it was first published in 1984 – so there aren’t references to how this works on the web or in newer technologies, so you’ll have to interpret the findings to your own means, but I recommend it.

So there’s a bit of social proof for you.

Want to discuss your marketing strategy with us? The Tomango team are always happy to have chat about any aspect of your online presence, branding, website and digital marketing.