What we did for Cade Street Nursery

Cade Street Nursery is a family business based in Heathfield, East Sussex, and they have been growing plants and flowers there since the 1980s.

Tomango had previously developed a website for them in 2014. Earlier this year their sales and planning manager Rob Honeysett got in touch asking if we could assist them with their marketing for the upcoming gardening season. Their aim for the key trading period from March to July inclusive was to bring double-digit percentage growth to the number of transactions through the plant centre compared to the same period in 2016.

Customers are still discovering us despite the business having been here for 30 years!

Tomango responded to the challenge of the targets set within the project and really got behind our business. Targets were exceeded and this resulted in a good uplift in sales.
Rob Honeysett
Cade Street Nursery Sales & Planning Manager

No large-scale projects were planned by the business over the summer, with Rob noting that they were keen to concentrate on organic growth before they started work on construction of a new indoor plant section and a show garden in the autumn and winter.

The nursery produces and sells over 250,000 individual plants a year across 800 varieties and colours.

After discussing the brief Rob had presented to us, it became clear that the success of this plan lay in publicising Cade Street Nursery to green-fingered folks that lived within a very close distance of their business.

We, therefore, decided to base the entirety of the campaign on Cade Street Nursery’s Facebook page, using Facebook’s advertising platform to directly target a local audience, cross-referenced with the core demographics of their typical customers.

Alongside the advertising – aimed at building brand awareness and adding valuable local Facebook Likes – we also made sure their page was constantly updated with vibrant, engaging content.

We even ran a #CadeStreetComp to further increase engagement – this saw almost 50 submissions of people’s home-grown gardening pictures, all for the chance to win some wonderful prizes! 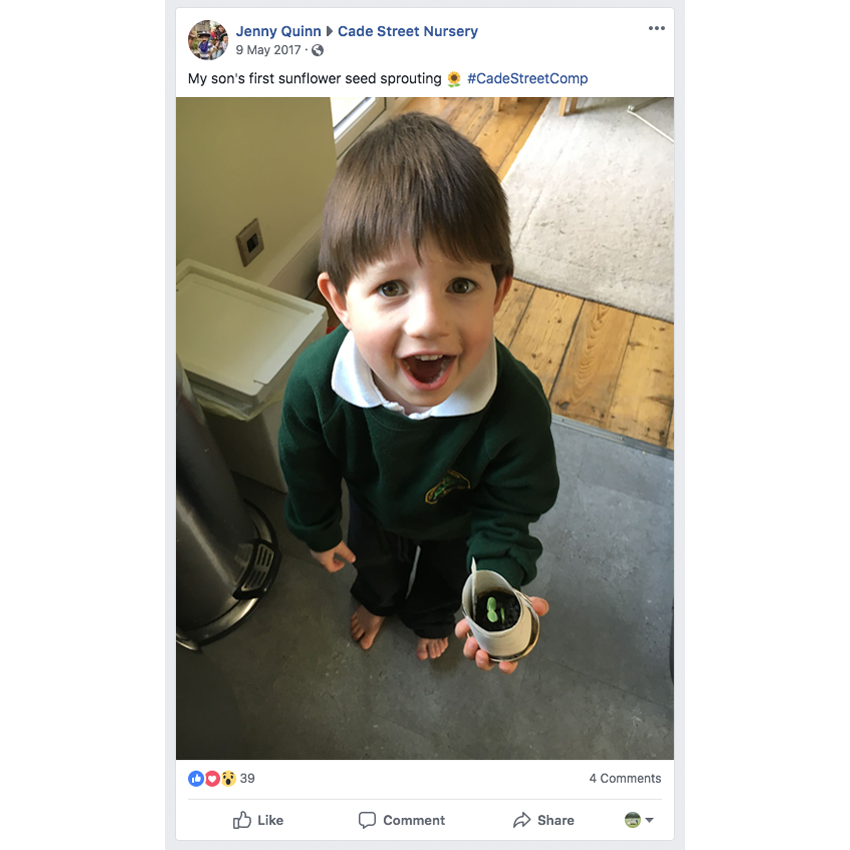 The winning entry in the #CadeStreetComp

Luckily, we were never short of pictures of the beautiful plants and flowers grown on-site. We combined these with gardening tips and advice, along with diary hooks such as National Gardening Week and the Chelsea Flower Show, to create a steady stream of posts.

After the campaign finished at the end of July, we met up with Rob and Debbie (who runs Cade Street’s market stall in Dulwich) to go through their sales figures.

After some quick calculations, we were all extremely pleased to see that Cade Street Nursery’s transaction totals had exceeded the benchmark set at the beginning of the project.

And, alongside this, the Facebook page saw a fantastic 202 per cent increase in Facebook likes – an audience size that’s now bigger than that of many other similar businesses in the area.

This includes almost 80 people that live in Heathfield (the nearest town to the business), along with a host of others from Mayfield, Uckfield, Cross-in-Hand, and many other towns and villages nearby.

I live in Heathfield and I didn’t know this place existed – looks great!
Comment left on Cade Street Nursery’s Facebook

Tomango really got behind our business and enabled us to dramatically improve our online presence.
Rob Honeysett
Cade Street Nursery Sales & Planning Manager

Both Rob and Debbie were very pleased with how the campaign turned out. With some exciting developments planned at the nursery, we’re all looking forward to seeing how we can help them again in the future!